“You have to wake up every day and intentionally make the decision to love the person they [your partner] are going to be that day.”

1.) You Wake Up Every Day with the Potential to be a Different Person

Dylan and I have been together for over six years, and this is something he mentioned to me several years ago that I have held tightly to ever since. We were having a conversation one day about a couple we both knew who had been married for a long time and in recent years experienced problems essentially because they were both changing as individuals. Unfortunately, their change was not being handled in a positive way by either of them, which resulted in a lot of fighting among other issues. He and I talked about why this couple couldn’t seem to really understand or cooperate with one another when at one point in time they had been such a dynamic duo, and then he said this, “Who someone was yesterday is different from who they are today, and who they are going to be tomorrow.” That makes sense, doesn’t it? We change so fast, even day to day, and sometimes it is hard to remember that. I am most definitely not the same person I was this time last year. Personally, I can attest that the same thing is true for Dylan as well. We have changed so incredibly much since we started dating, and thankfully most of those changes for us throughout the years were positive and healthy. It’s always good to be prepared to handle changes that might not be so great though.

2.) You Have to Decide to Love Who Your Partner is No Matter How They Change

Coming off of that last idea that people change every single day then poses the questions: How do I deal with the fact that the person I fell in love with might act differently at different periods of life? What if I don’t like it? (Disclaimer: This advice does not apply to relationships/situations that may be abusive, unhealthy, or just generally upsetting to one or both of the people involved.) Here’s the thing, it is not always going to be easy. If you genuinely love your boyfriend/girlfriend/spouse and you want a relationship with them, then there are going to be some times when you might have to tell yourself to actively, thoughtfully, and intentionally show love and grace. Relationships that last are hard work to maintain — but they are so worth it. You have to love through the hard times, the bad moods, the stress, the changes, the fluctuating feelings, and a lot more. Do not expect that just because it is easy to love someone during one season of life that it means you can easily love them through the hard seasons too — sometimes you have to look through the hard stuff and the changes to just find the person buried down in there. That’s not to say that it’ll always be difficult though, because most of the time it is really great. You just have to make sure that you are willing to say to yourself, I fell in love with this person, and I will love them no matter what happens today.

3.) You Are Not Required to Fight in Order to Maintain a Healthy Relationship

This one might sound a little weird at first, but you’ve probably at some point heard someone say, “Fighting is healthy for your relationship.” Or, “Fighting with your spouse is pretty much inevitable anyway, just make sure it doesn’t go too far.” Or maybe even this, “Not having an occasional fight with your significant other means that something must be wrong with your communication.” So here is something I have learned not from Dylan directly, but just through the general dynamics of our relationship for the past several years. You do not have to fight with your partner. I promise there is no official relationship board that is going to come knocking on your door wondering why you and your partner don’t just “Fight like a normal couple.” Disagreements are most likely inevitable because, hello, we’re human. However, yelling at each other, getting so frustrated with one another that you can’t even see straight, disagreeing to the point of not talking for days, and any other variety of fighting you can think of — is actually not entirely necessary.

Through numerous moments and seasons of difficulties Dylan and I have grown incredibly proficient in the art of talking through things and explaining to one another how we genuinely feel. Sometimes we come out the other side on the same page, but then other times we might not reach a point where we see eye to eye, and that’s still okay. Believe me, I understand those flares of anger that come out of nowhere making you want to yell like nobody’s business, but if you try to wait for that initial impulse to subside then it’s significantly easier to just talk (and listen) to your partner. Be raw, be honest, lay it all completely out on the table and hold nothing back, but do not do it with fire coming out of your mouth. Everyone’s relationship is different; you do you. Just know that there are options, and don’t let anyone make you feel inadequate for not wanting to fight in the traditional sense.

Don’t stop dating your partner! I cannot stress this enough. The longer you have been together the more important this becomes. This is a truth that Dylan lovingly brought to my attention last year. For probably about the first three years that he and I were together, date nights were pretty frequent occurrences. After a while, however, when we became more weighed down by college, jobs, other responsibilities, and that new-relationship-adrenaline-rush wore off, our date nights dwindled. We still hung out together constantly, studied together, had dinner with each other’s families, grocery shopped together, et cetera, but we were not actively and purposefully going on real dates. We were doing life together, which is great, but we were letting the romantic side fade. A partner you can run errands with who also doubles as a study buddy is fantastic and definitely important, but the sweet intentional break from the norm with the love of your life is essential.

This was a huge obstacle that we each individually had to overcome and sometimes still struggle with a bit to this day. There were plenty of occasions when one of us would do something wrong or say something that hurt the other one’s feelings, causing remorse to kick into overdrive. Occasionally it would get to a point where we both kept apologizing so much for little things that neither of us could actually talk through the issues and just move on. Now we tend to do better at apologizing once, working it out, and moving forward. If something happens and it’s your fault; say you’re sorry and mean it, but then move on and grow from that scenario.

6.) Just Because it’s Not the Way I Would Do it, Doesn’t Mean You Did it Wrong

I struggle a lot with asking for help for several reasons, (1) I’m prideful, and I feel like I should do things by myself to prove I can, (2) I genuinely don’t want to inconvenience other people by asking them to stop what they’re doing to help me, and (3) I’m very particular about how I feel certain things should be done. I know that is terrible, but I’m working on getting better about it. This is important to bring up because Dylan is an intrinsically helpful person, especially towards me. There have been instances in the past when he has offered to help me, I accepted, and then after he completed the task I typically reacted by saying, “Thank you, honey” and then waited until he was out of the room so I could redo it myself . Or I would express to him how I thought it should’ve been done, then gave my reasons for thinking that — but still thanked him for trying. That is in no way, shape, or form a fair thing to do. It took me a long time to even recognize that I needed to ease up on it, and I regret the times I made him feel bad as a result. The truth is, he is amazing. He is helpful, and even if he doesn’t execute a task the same way I might do it, does not mean that he did anything incorrectly, just differently. Different is still good! ❤

Thank you so much for stopping by and reading! It means the world to me. Always feel welcome to comment, make suggestions, and ask questions! 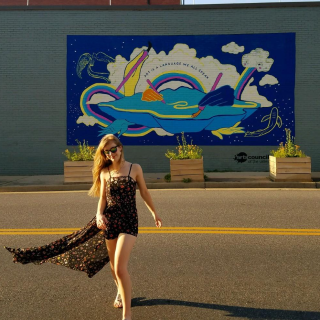